Ryan was referred to an oral and maxillofacial surgeon after a tooth extraction revealed an aggressive tumor in his jaw. This is his story about undergoing fibula free flap reconstruction. From the American Association of Oral and Maxillofacial Surgeons

I had a pain in my right jaw, tooth. So, went to my dentist, my general dentist. And they pulled the tooth, but when they pulled the tooth, they saw that it was a cyst under. They recommended for me to see an oral surgeon. When the initial diagnosed it, it was a cyst, it was it could be cancer, we have to test it. And luckily it was not cancerous. So just aggressive tumor that was eating away at the bone in my jaw. Eventually the decision was made to have reconstructive jaw surgery.

Ryan had Ameloblastoma, which is a tumor in the mandible that’s benign, but aggressive, and it needed to be taken out. And, so we were able to do that, but in order to do that successfully, we had to replace the bone that we took out. So our options were, we can borrow some tissue or bone. In this case, for Ryan, we borrowed it from the lower leg and we transplant into Ryan and to reconstruct a jaw. Often patients like Ryan come in with a lot of anxiety from a procedure like this, and that they’re afraid they won’t be able to return to a normal life, the normal daily activities, their job. Ryan is an active runner, who wanted to be able to dance at his wedding. He wanted to be able to speak at his job. He wanted to be able to get back to running.

So it was scary. I’m a big runner, this is kinda what I do, to kinda let steam off. So I was very nervous about it. The surgery entailed, I guess the entire day. Showing up at the hospital, getting prepared for surgery, I think surgery was eight hours. Eight to 10 hour surgery. The recovery, I think is pretty fast for such a major surgery and kind of issue. And I would say, my life immediately after surgery, six months was easily just back to the person I was, doing the things that I do. But it was a pretty fast recovery that honestly surprised me.

I think people come to an Oral Maxillofacial Surgeon to do this procedure because, I think we are able to offer the full scope of the treatment. And by that, I mean, we can remove the tumor, the affected part of the jaw, we can harvest bone and we can reconstruct the part of the jaw that needs to be replaced. We can perform neurografting to return sensation to the lip and chin. And we can also place dental implants at the time of the original surgery, or down the road, to give the patient back their bite. And I think that’s what patients really want when they come to see us, is that they wanna really get back to the form that they were before they were affected by this tumor.

All my oral surgeons during this process have been, I think remarkable doctors. They have been both direct with me, of telling me what’s wrong, what can do. But not overly aggressive and in saying, “Let’s do surgery.” Taking a much more conservative approach first, and then kinda using surgery as a last resort. The doctors during the entire process were excellent. 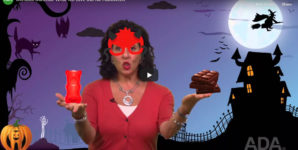 What do dentists give out on Halloween?

Halloween can be almost as scary for dentists as it is for children. Just imagine all of those … END_OF_DOCUMENT_TOKEN_TO_BE_REPLACED